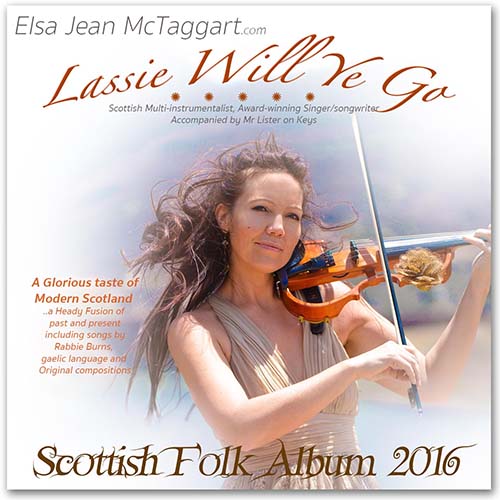 'Lassie Will Ye Go' album is to be released on the 5th August 2016 at the Edinburgh Fringe Festival.

It will be Elsa Jean McTaggart's first Scottish Folk Album, featuring well known Scottish traditional and Folk Songs, including some in the gaelic language and some by Rabbie Burns performed in Elsa's unique style and accompaniment by the most talented Mr Lister on the Keys.

The album will also feature some of Elsa's own original music and songs that fit nicely into the folk genre, and furthermore, some work by unknown artists which we have discovered on our travels around Scotland and feel these pieces just need to be heard... We are honoured to have their compositions on our album.

Pre-order your copy now…By ordering your copy in advance you are really helping us out in the cost of studio fees and production, in appreciation, we would like to include in all pre-sale purchases of the ‘Lassie Will Ye Go’ album, a FREE DVD of our recent video of the song ‘The Dark Island’ produced by David Farr. The music track will also feature in the album. Orders can be placed online  at McTaggarts-Store.